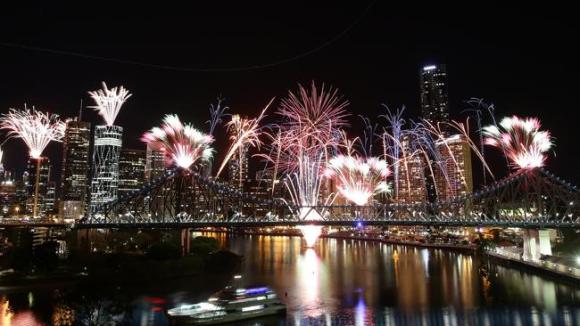 On Saturday, the 27th of September, we traveled to pick up my disabled son’s girls for his access period of half of the school holidays.

Often, at this time of the year, we pass through the city of Brisbane on our way back home. The ending of a two week long arts and culture festival with an event called ‘Riverfire’ is on at this time, but we usually pass it by because by then we are getting very tired after such a long round trip to pick up the girls.

(One has dyed her hair purple, again…I miss her blonde locks).

This year, we picked them up earlier in the day, so we spontaneously decided to stop at Southbank and see how we fared in energy.

The trouble was that we’d taken our dogs with us in the car, so we were not allowed to enter the barriered precinct of Southbank.

(Dogs are allowed in the parklands at any other time of the year, but apparently not during main events. I wish we’d known that before we parked our car, after taking an hour to find a space).

So, after grabbing some lunch at a dog friendly cafe (we had to sit outside), we walked in the hot sun toward Kangaroo Point and found a spot near the Maritime Museum, far from the madding crowd and the music blaring on speakers where the main viewing could be had.

(My husband actually walked all the way back to our car and moved it, after we found another parking space closer to where we ended up… which was very lucky when most street parking was closed off and we couldn’t enter the ‘park and pay’ areas with our dogs).

We actually got a nice bit of grass on a slope overlooking the river, and then proceeded to sit for the next five and a half hours, (during which time we got crowded in by other spectators), until the spectacle we’d decided to view finally happened.

By then, the girls were restless, my back was sore, and my bum was so numb that even I was wriggling…  I hadn’t prepared well for this impromptu event, though we did bring a couple of blankets and travel pillows from the car and some water bottles, plus a nearby kiosk sold us nearly stale popcorn and flavored fairy floss (so we got high on junk food until they also fried up a sausage sizzle).

I was surprised at how well behaved the girls actually were, apart from a near incident when they began throwing small twigs at each other. Of course, cuddly me became the back rest for one of the girls and my hubby, but I did enjoy the snuggle.

When the defence force flyovers began, with helicopters and jets almost ruining our eardrums, we soon began perking up – and when the fireworks lit up the sky at just after 7 p.m. it really was worth the long wait. I couldn’t believe that the fireworks went for over 20 minutes!

We were limited to the section we were sitting at, so could not see the full snaking river length lit up with fireworks (which is why it is called ‘Riverfire’), as the top of tall buildings, bridges, and floating pontoons all blast color into the sky, and we could not hear the music that set the background for this visual feast but it was superb, anyway.

I was brought to mind of how much of life is so easily put aside because we get tired, or are in pain, or dealing with serious or draining issues that mean we feel we have little left to bring to events such as this.

I excused our non-attendance for so many years because of these types of issues, and backed that up by saying that you never saw the fireworks well from beside the river, anyway, because of all the drifting smoke. (Yet the place where we sat didn’t have this problem). I also kept saying you see it all better on television. (I thought I was being practical).

When we lived in Brisbane city many years ago, we regularly walked to Southbank on these nights, (didn’t have to worry about parking, then), and thoroughly enjoyed ‘Riverfire’ with our own children. Watching my grandchildren go silent and seeing the sky lit up like that made me remember that television has nothing on reality (I now admit).

The girls have got me thinking about attending next year – but with better planning and preparation. There were people next to us sitting in fold out chairs, eating hot chicken and tapenade, and having a nice glass of wine… I think I can do that! (The girls think so, too).

Lilipily Spirit – Empower Your Life, Connect with the Divine

Empower Your Life – Connect with the Divine